Abstract : It is estimated that diabetes mellitus affects 4 per cent of the world’s population, almost half of whom have some degree of DR at any given time. DR occurs both in type 1(Juvenile Diabetes or Childhood Diabetes )and type 2 (adult onset) diabetes mellitus and has been shown that nearly all type 1 and 75 per cent of type 2 diabetes will develop DR after 15 yr duration of diabetes . In collaboration with IIT Kharagpur a software has been developed which is used for the early detection and risk categorisation of diabetic retinopathy (DR). The software uses data analytics capabilities to automatically compare and analyze retina images of the patient. It can tell if the patient has DR and also provides risk categorization ranging from low to medium and high. Results with the software shows accuracy level of 77-93 percent when real patient screening for diabetic retinopathy.

Diabetic retinopathy (DR) or retinal damage caused by diabetes is a predominant reason for loss of vision. In 2007, International Diabetes Federation estimated that 40.9 million people in India were diabetic and speculated that this number would rise to 69.9 million by 2025. However, DR can be prevented if diagnosed early. With the increasing tendency of diabetes in Indian population, there should be a retinal screening protocol for follow-up on routinely basis. This calls for an immediate development of DR screening tool for Indian (diabetic) population to prevent it on regular basis. Computer assisted screening of diabetic patients using fundus images is highly relevant not only to provide mass screening service but also to act as a clinical decision support system in order to provide ‘Affordable’, ‘Accessible’ DR screening facilities.

To conduct a feasibility study of computer-aided screening for diabetic retinopathy by developing a computerized program to automatically detect retinal changes from digital retinal images.

The study was carried out in three steps. Step 1 was to collect baseline retinal image data of  eyes of normal subjects with normal fundus and data  of diabetic patients with diabetic retinopathy. All data were recorded by digital fundus camera. Step 2 was to analyze all retinal images for normal and abnormal features. By this method, the automated computerized screening program was developed inIndian Institute of Technology Kharagpur  in the department ofSchool of Medical Science & TechnologyThe program preprocesses color retinal images and recognizes the main retinal components (optic disc, fovea and blood vessels) and diabetic features such as exudates, haemorrhages, and microaneurysms. All of the accumulated information is interpreted as normal, abnormal, or unknown. Step 3 was to evaluate the sensitivity and specificity of the computerized screening program by testing the program on diabetic patients and comparing the program’s results with the results of screening by retinal specialist in Susrut eye hospital and research centre.

In digital world, an image can be described as two-dimensional matrix where each unit (pixel) contains a numeric value (intensity).  The dimension of the matrix is equal to the original image size. Color image like RGB has three channel viz. Red, Green and Blue. So the pixel value of any point of an image is sum of RED, GREEN and GREEN value.  In a image we can consider some group of entities like background and foreground (blood vessels, microaneurysms etc). Each entity or group contain similar pixel value. 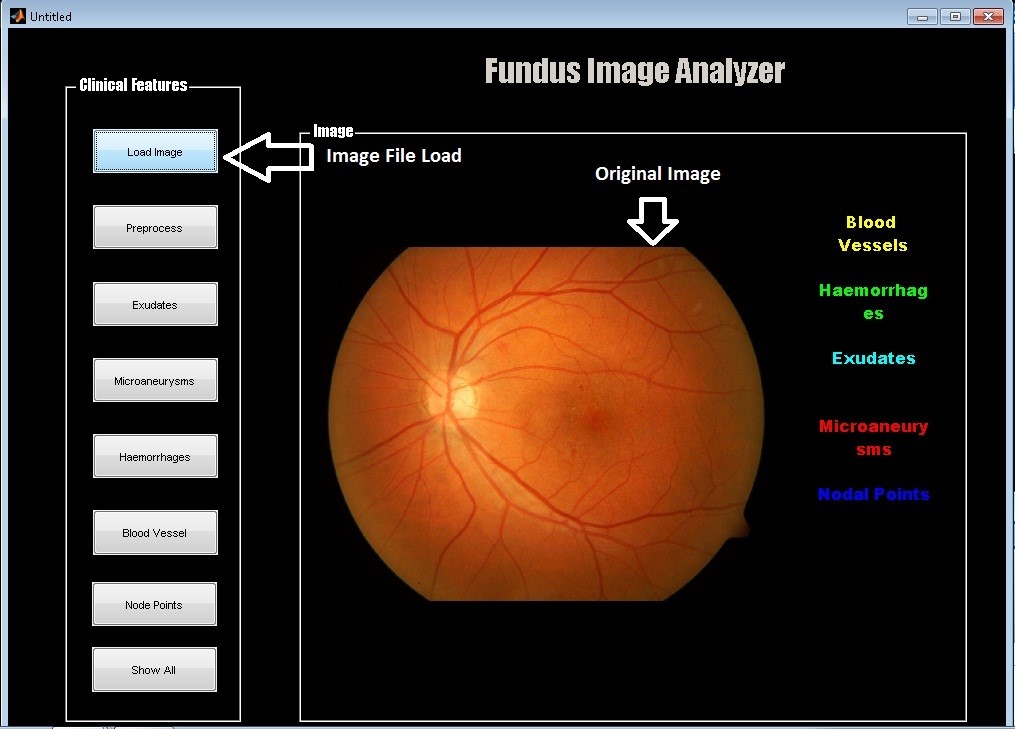 We needed pre-processing to make the image more noise free and accurate. Neighborhood sampling algorithm makes the image more robust to identify the vessel by selecting the pixel with values lies between 0.025 -0.55 μm. 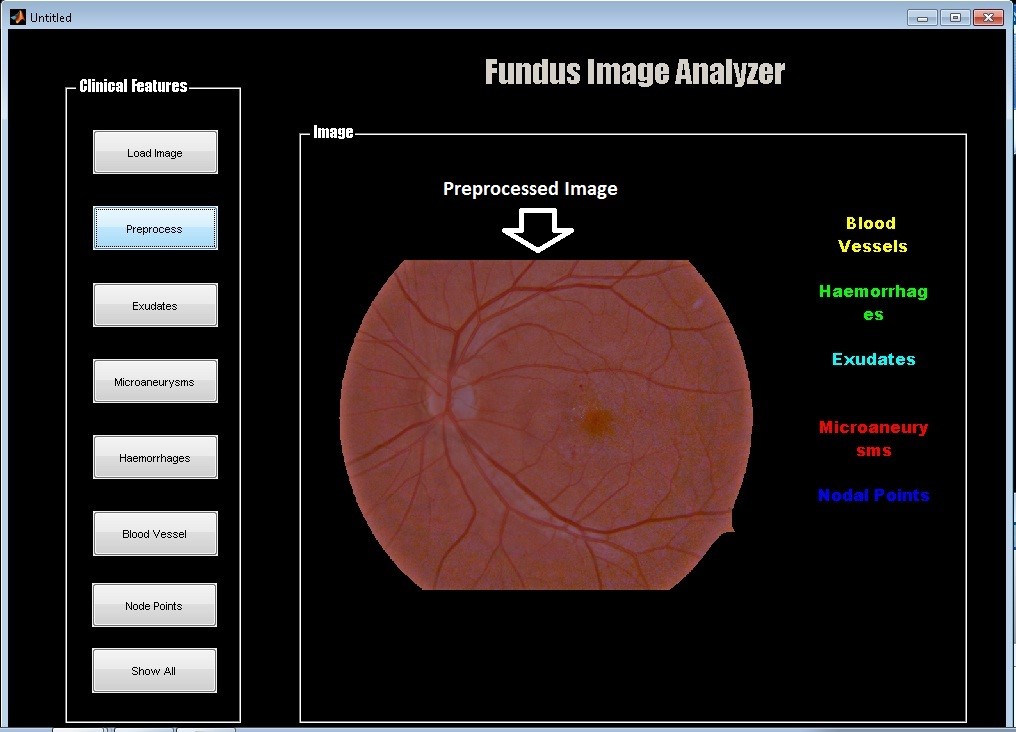 Each color channel generate different pixel intensity value for the entities of the image. From study, we got that, the green color channel based image (pixel value only containing green intensity) gives the more suitable pixel set where different entity can be distinguished like exudates from image background.

Later we simply identify the set of pixels for different entities and segment them from the image based on thresholding (choose only those pixel  values lesser/greater than a particular value) and some mathematical morphological reconstruction. 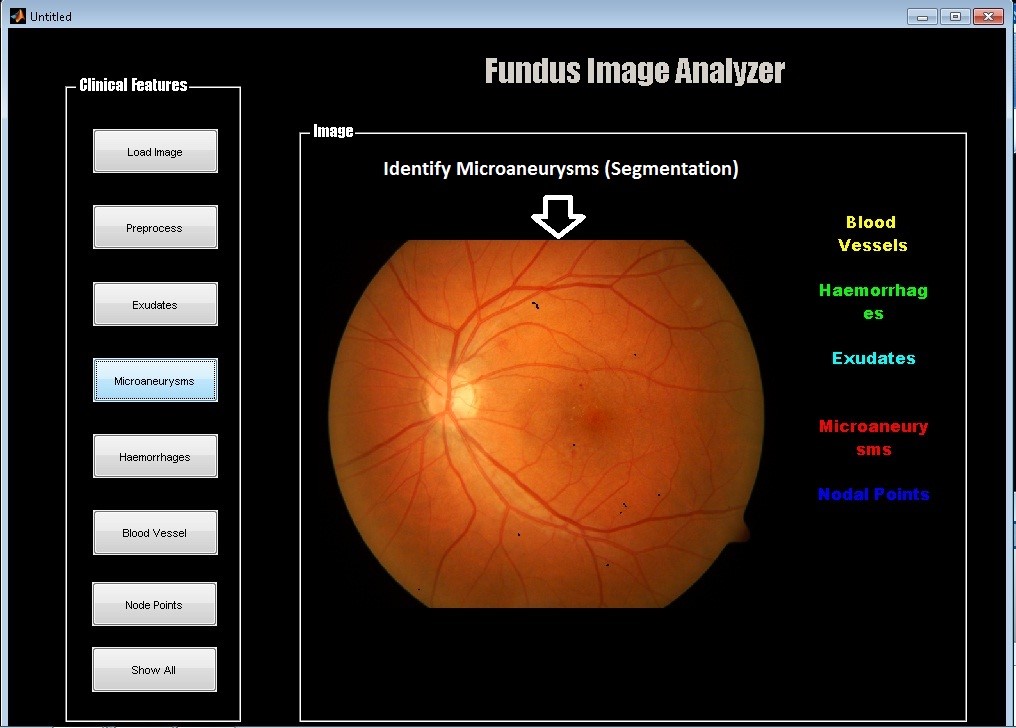 Hence, high intensity regions were segmented by thresholding for morphological reconstruction. Quantitative features were extracted as counts, total area due to microaneuryms, haemorrhages, exudates, blood vessels, number of bifurcation points. Features were statistically analyzed to find most significant ones. Finally, DR screening module has been developed based on neural network and fuzzy-rule based approaches.

The developed software provided around 85%, 77%, and 93% accuracy using the 100 images, respectively, for hemorrhages and microaneurysms, hard exudates . (Fig-5) 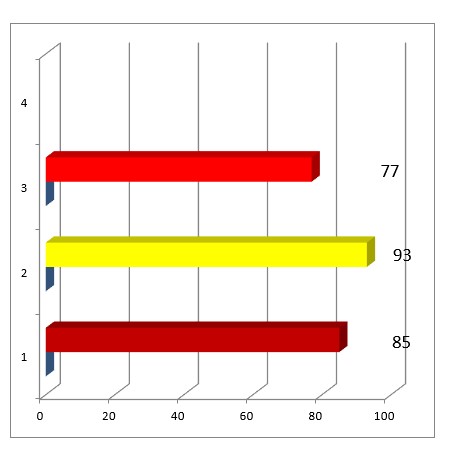