Ten Things You Should Know about 3D Viewing System in Ophthalmology 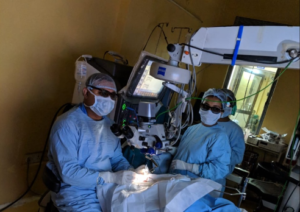 1. Evolution of this latest state of the art technology in ophthalmology:

Three-dimensional (3D) display systems were first developed for aircraft and military use. The term “heads-up surgery” derived from the so-called “head-up display”, a display system first used in aircraft flight decks that projects an image into the normal field of view. This display system allows visualization in a “heads-up” position. In this procedure, the operating surgeon does not perform by looking at the eyepieces of the microscope, but by viewing the microscopic image on a panel display sent from a 3D camera[1]. After the creation of the TrueVision 3D Visualization System for Microsurgery, this innovative, ground-breaking technological boon has entered the operating room.

Conventional 3D systems are classified as either active or passive systems.

Head mounting systems (HMS) are active systems. There are many HMS are available like, –

Ivan Sutherland first started working on HMS in 1960. Its main purpose was to be used in military, police, firefighting, and civilian-commercial use, namely in video gaming and sports. HMS has been used by authorities to display tactical information such as maps or thermal imaging data while viewing a real scene.

HMS was first adapted in the operating room by Sony in 2012. They developed HMS-3000MT [2], which is a personal viewing system that provides a 3D colour video display of images from 3D surgical camera systems. Not only for the operating surgeon, but this system can also connect to a second head-mounted monitor, giving other theatre staff a simultaneous 3D view.

Mechanism of action for HMS: HMS device requires different images for the left and right eyes for depth perception. It differs from the conventional 3D system by showing two simultaneous images, one for each eye, avoiding the ghosting image effect caused by cross-talk in active 3D systems. The system of dual video inputs using two independent organic light-emitting diodes (OLED) panels offers a complete separate video signal to each eye, which provides the maximum resolution for each image [2].

Different passive systems in ophthalmology are,

The TrueVision 3D Surgical System is a camera unit that attaches to standard surgical microscopes, sending stereoscopic images and video to a 3D, high-definition (HD), large-screen monitor positioned a few feet from the surgeon, providing visualization in real-time. The US Food and Drug Administration (FDA) has granted clearance for the TrueVision Refractive Cataract Toolset, an application that provides 3D graphical overlays for image-guided cataract surgery. More recently, TrueVision has developed the TrueGuide and the TruePlan applications, which have been designed for intelligent surgical planning to aid in achieving targeted refractive outcomes, as in toric IOL.

ARTEVO 800 was unveiled in 2019 at ASCRS. It produces a stereoscopic 3D image that is viewed using passive polarized glasses on a 55 inch 4K monitor, with 25% higher resolution and brightness. The field of vision is exceptional, no need to refocus the microscope; minor adjustments can be done with the foot pedal. Auto-Adjust technology anticipates workflow and change settings automatically when switched between the anterior and posterior segment providing a great depth of focus. Data, such as intraoperative OCT, cataract assistance functions, phaco vitrectomy values, patient information even operating room settings can be overlaid on to the screen without blocking the surgical view. The Hybrid technology allows the surgeon to use oculars at any point, a sterile knob can redirect a portion of the light to them while rest of the crew watches on screen, making it a powerful teaching tool.

Weinstock et al introduced a 3D viewing system in ophthalmology and first performed cataract surgery in 2010 with TrueVision. He reported a minimal time difference between the binocular microscope and 3D surgery. Interestingly, the rate of unplanned vitrectomy was three times higher in the standard microscope group compared with the TrueVision group. Hypothetically, superior depth perception, and higher magnification of the image may be factors associated with reduced risk of posterior capsular rupture and improved anterior vitrectomy[4,5].

Hamasaki et al in 2019 published a small case series of strabismus surgery with NGENUITY® 3D Visualization System. They opined Strabismus surgery could be performed without special illumination, the potential to reduce phototoxic injury but there is some degree of assistant’s discomfort [10].

In the year of 2011 Riemman[11] performed a pilot study in VR surgery. Subsequently, Eckardt C and Paulo EB (2016) used TrueVision and reported superior ergonomics, similar speed, and ease of use of instruments. Adam et al in 2017 performed the surgery at 10% luminance level and concluded reduced requirements of illumination power [12].

With the help of NGENUITY 3D system, Skinner et al (2018) performed VR surgery in severe kyphotic patients with good pain control[13]. Coppola et al in 2017 proved triamcinolone staining is not required in 3D HUD[14]. There are numerous studies that concluded the 3D heads-up display system is not inferior to conventional surgery and, despite there being an 80-ms latency time compared with the standard microscope, it is not noticeable during intraocular procedures. In addition, 3D systems may reduce copiopia and asthenopia [15,16].

Traditional microsurgery can lead surgeons to deleterious neck and back postures that cause musculoskeletal fatigue and injuries, which has been associated with reduced surgical longevity. The prevalence of neck, upper body, or lower back symptoms among ophthalmologists has been reported to be as high as 62%. Superior ergonomics and good posture during the 3D surgery can provide a solution to this age-old hazard.

The brightness of the surgical field can be superior to that of traditional surgery, without exposing the retina to additional light. Electronic amplification of the camera’s signal to increase brightness might be helpful in situations of vitreous hemorrhage, opaque media, or dark pigmented fundus. Furthermore, the digital enhancement of the image might allow for the lesser application of vital dyes during surgery, reducing potential toxic side effects of such products. In addition, the NGENUITY 3D allows the simultaneous display of OCT scans and fluorescein angiograms that might facilitate and shorten procedure times. The rapid learning curve of the NGENUITY system has been confirmed in a recent prospective study assessing the learning curve in macular hole surgery[17].

Although three-dimensional display systems are increasingly demonstrating good results in ophthalmology, there are some noteworthy pitfalls. Most notably assistant discomfort and operating theatre logistics, visual disturbance by media opacities, and surgeon headache and nausea after prolonged laser photocoagulation. Some HMS devices will require becoming wireless before being more widely adopted. In conclusion, the 3D viewing system is showing ever more promising results in the field of ophthalmology. Despite few minor drawbacks, it’s probably the next sensation in ocular microsurgery offering benefits to both experienced surgeons and trainees.